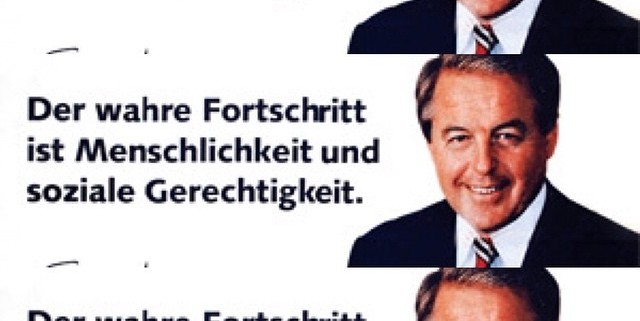 Yesterday I saw Franz “Vranz” Vranitzky taking part in a discussion group, and felt quite emotional. He was the Chancellor who shaped my political awareness. I was 13 when he became Chancellor and 24 when he resigned, which is why I long for another politician of the Vranitzky mould. It is the social-liberal dimension that I miss in today’s politics.

Yesterday’s discussion naturally focused on Red/Blue and the potential (future) prospects of the “Grand” Coalition, or rather “regime parties”. Vranitzky explained clearly and at some length why he broke from Haider’s Freedom Party of Austria (FPÖ). His rationale for doing so still seems more than logical almost 30 years after the event.

No “No” to the FPÖ
So why do his arguments hold no water in the current age? For plebiscitary reasons? Yes and No. Perhaps because no party these days is willing to give a categorical “No” to coalition with the FPÖ, which means the FPÖ is seen as an inherently “anti-regime” party. This woolly attitude to the FPÖ is ironically what gives it its strength and makes it an interesting prospect as a potential coalition partner. In addition, the power politics factor assumed increasing significance during the 00s (“noughties”) of the 21st century. In fact, that was Schüssel’s real breach of taboo: to put his show of power up against the existing rules of the game and seemingly ahead of the interests of the state – notwithstanding the political reform goals that were worthy of discussion and which motivated him to do so.

At that time in the 1990s – despite the gradual rise of Jörg Haider – there were some comparatively liberal approaches evident in Austrian politics: social-liberal on the part of the Social Democratic Party (SPÖ) and conservative-liberal on the part of the Austrian People’s Party (ÖVP) and its “colourful figures”. The man who went on to become Federal Chancellor, Wolfgang Schüssel, (a political protégé of Busek), was also one of the driving forces of a new liberal approach. There was no talk then of the Haider FP being a possible coalition partner – at least not in the minds of the general public or the media. At the end of the 1990s, the Grand Coalition took the country further, in terms of political, social and economic policy. Vranitzky managed the Waldheim years by steering a very careful political course, which meant the international isolation of Austria was kept to a minimum. He managed to walk the delicate tightrope between USA and Israel, issuing the first official statement in almost 50 (!) years to dispel the myth of Austria as the victim, when he spoke in 1991 of shared responsibility for the pain of the 1938 Anschluss.

Joining the EU
The collaborative showpiece of the Grand Coalition was the referendum over Austria joining the EU and it subsequent accession. The SPÖ and ÖVP were pro-Europe parties, much more so than they are today, at a time when over 90% of decision-making occurs in Brussels. Back then, there was some dispute over whether People’s Party foreign ministers were too caught up in their foreign policy role and in jostling with successor Waldheim for position on foreign policy appearances. Foreign policy and EU politics in particular were a key issue for Austria.

And on the domestic political front, the financial duo of Ferdinand Lacina as Minister and Johannes Ditz as Secretary of State achieved a masterstroke with their tax reform – which Vranitzky very confidently rated yesterday as much better than the current one. (Interestingly enough, the current Finance Minister has no Secretary of State, despite the vast scope and complexity of his area of responsibility).

Integrity – where are you?
What Vranitzky possesses, above all else, is integrity. Vranitzky has never re-emerged, as many of his ex-colleagues have, as an – extremely highly paid – consultant to some of the authoritarian regimes within the former UDSSR. In that sense, he is on a par with Helmut Schmidt who, as “elder” statesman, airs his opinions on current trends. He is well aware that that form of “retirement provision” does further long-term damage to the already tarnished image of politicians and thus strengthens the activity of anti-regime parties like the FPÖ.

And he stands for the kind of political animal so highly sought after in this day and age. Under his leadership, Austria instigated social-liberal policy that also accommodated the word “social” within the name of its coalition partner in its historical incarnation of “Christian Social”. In my opinion, this is what we need to be doing now: strengthening the “social” element of political discourse. In the midst of the 4th revolution – digitalisation – it is a central and inescapable issue. Zuckerberg and Co were quick to grasp this. And we have them to thank for the term social media.

Hamburg-Vienna: the return of liberalism?

Alexander Hamilton – a role model for the EU?
Scroll to top