The Hypo Commission of Inquiry was celebrated as a great achievement in the development of Austrian parliamentarianism – except, on closer inspection, it appears to be the exact opposite, or rather its swansong.

Development of decisive state will by a collegial body democratically elected by the people on the basis of universal and equal suffrage and according to the majority rule principle.

It is more than the will of the people that transparency, information and communication prevail in the case of Hypo. But it seems as if disclosure of all the facts and files is declining at the same time as the need for information is rising.

Separation of powers is painful

It is probably the blurring of a matter so important to our political system – the separation of powers – that is also at fault here. Montesquieu and Locke were the founding fathers of that principle. And they would be a little annoyed at the way it is being applied in the case of the Hypo Commission .

The Chairwoman of the Hypo Commission is the President of the National Council (the lower house of the Austrian Parliament). She is the second-highest ranked politician in this country, which means she holds a position of great responsibility to her people, i.e. to us. However, up until recently, that responsibility rested with Doris Bures in her role as SPÖ (Social Democratic Party) Infrastructure Minister in the government. And she has long been viewed as a trusted friend of Chancellor Faymann. To stay with that party: Jan Krainer is the Whip responsible for Hypo matters, Finance spokesman for the SPÖ and also a government advisor. No “Locke-ing it in” there either. And the current SPÖ party supremo is the former State Secretary, who was present for the nationalisation bail-out.

In the case of the ÖVP (Austrian People’s Party), on the other hand, there is a tendency for a protective wall to be erected in front of the ÖVP Finance Ministers (including Grasser). Yet the very opposite should be the case. After all, a new wing within the ÖVP – generally described as liberal – is now at the helm. Liberals tend to set store by values like the right to information. At the same time, however, that party is also obliged to uphold the liberal principles of data privacy and the right to private sphere protection (professional confidentiality and banking secrecy). It will be fascinating to see how that balancing act plays out. Judging by the first few meetings, stonewalling is the initial approach.

The opposition is divided. The FPÖ (Freedom Party) has to try and keep the damage away from its own party and frame it as a failure of the system and evidence of corruption – even though that party also contains members who had both federal and provincial government dealings with Hypo. Team Stronach is faced with similar dilemmas. Their man on the Commission of Inquiry, Robert Lugar, moved back in the day from the BZÖ (Alliance for the Future of Austria) to Stronach. They have to walk the tricky tightrope between denunciation and dismay – as do, incidentally, the Greens since they had MPs in the Carinthia provincial government when Hypo first got into strife. However, it has to be conceded that, to their credit, the Greens and the NEOS (The New Austria) – the only party, incidentally, that had nothing to do with Hypo thanks to its late birth as a political party – are fighting like mad for parliamentarianism, whether in an activist manner like Kogler or very pragmatically in the case of Hable.

95% of the Hypo Case files are not publicly accessible. This means that media reporting will be very much dependent on “Hypoleaks”, if any relatively objective or factual overview is to be provided. To which we as citizens of this country have a right, by the way – in view of the billions we are providing as financiers of this solution via such things as the tax system.

Yet it would be really simple to arrange: an official Twitter account for the Hypo Commission of Inquiry, direct transmission of certain witness statements (with their consent and that of all parties involved), regular press briefings, etc.

The media is already casting aspersions that this minority commission is a unique phenomenon in the history of Austrian parliamentarianism. We can all only hope we are wrong, and that parliamentarianism will emerge strengthened rather than weakened by this Commission of Inquiry. As well as achieving clarity over Hypo, that should be the common goal of all the parties involved.

John Locke
…. The first and fundamental positive law of all commonwealths is the establishing of the legislative power; as the first and fundamental natural law, which is to govern even the legislative itself, is the preservation of the society and…of every person in it. This legislative is not only the supreme power of the commonwealth, but sacred and unalterable in the hands where the community have once placed it; nor can any edict of anybody else, in what form soever conceived, or by what power soever backed, have the force and obligation of a law, which has not its sanction from that legislative which the public has chosen and appointed …. 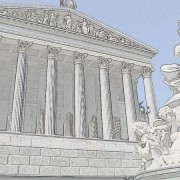 I heard this morning on the radio that the failed Austrian bank Hypo has so far cost me € 630. That’s two months of rent, according to the latest account by the Vienna Green party. So the Hypotopia protest project is also gaining more profile again (a model city created to show what could be built for the same cost as the € 19 billion bailout). This makes me wish even more that I was allowed to be present as a citizen of Austria at the Commission of Inquiry launched into Hypo, and with that I probably hit upon a very salient issue: real life parliamentarianism.
END_OF_DOCUMENT_TOKEN_TO_BE_REPLACED