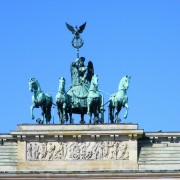 *without anger or bias

Already in the days of Caesar and Tacitus, the Germanic people have been the subject of interest. In his work Germania, Tacitus praised their strict mores and moral standards in contrast to the degeneracy of Roman life. Nevertheless “the Germans” were always the subject of attack. Till this day, and Angela Merkel. Why?

One point that is interesting to note is that Germany is no longer feared in a political or military sense. This is a result of the European Union and its fathers such as Jacques Delors, Giscard d´Estaing, Helmut Kohl and Hans Dietrich Genscher. Its new power is economic in nature and apparently this is now much more alarming than anything experienced in the past. It is then only a small step further to compare the Germany of today with the atrocities and the policies of the Nazi era. Hence, mixing with a de facto economic position of power is the very emotionally-driven political threat which is supposedly emanating from Germany. This impression is enhanced too by remarks such as that made by Volker Kauder, parliamentary group leader of the ruling Christian Democrats (CDU): “Europe is speaking German”.

Yet the question I have is why the largest economy in the European Union should be condemned to perform less successfully than it is doing. Apart from the fact that Austria benefits greatly from this situation or, in other words, is very dependent economically on Germany, I would still like to know why, in a European Union, solidarity and mutual support (as in the example of Greece) are perceived as a threat.

Germany is making the European Union very strong, both politically and economically. The problem is, however, that Angela Merkel is not receiving unconditional support for her efforts to make the European Union an independent, self-assured community. The British and the French are looking more and more often towards America (although for different reasons), parts of Eastern Europe continue to be Russia-oriented. This Russia in turn is in no time at all developing a Eurasian economic area, in which the BRICS countries also find themselves. The sanctions imposed after the annexation of the Crimea, contrary to international law, were pushed for by Angela Merkel, though with the focus on strengthening Europe and not needing the USA as “the eternal big brother”. But the European Union is not finding its proper place in this global order, as the subject of political debate with an almost neurotic fixation is the threat emanating from Germany. However there would in actual fact be important issues to resolve: immigration policy, creating a European Union peace force (and thus independence from NATO), fiscal union, the TTIP debate.

Taking advantage of that, the ECB for instance is not exactly an ideal partner for the former Europe of SMEs and its decentralised customer banks (the strength of which especially in Germany is particularly pronounced). Let me remind you that Jens Weidmann, head of Deutsche Bank, was one of the biggest opponents of the ECB’s quantitative easing plan.

The regulatory requirements from Brussels also seem to be more or less a direct attack on the economically prosperous Germany: the Federal Republic managed to get through the financial crisis relatively unharmed through its regional banks such as savings banks (Sparkassen) and credit unions (Volksbanken) and, for example, gave its assistance to the ESM as the largest donor. Precisely these structures, however, stand in the way of a future EU capital markets union, and also in the way of EC President Jean-Claude Juncker’s investment programme.

The risk is that, because of the purely power political reasoning and actions of the economic crisis states in the EU and the institutions outside and within the institutional framework, Germany is being made an outsider in the medium term, and thus the EU’s largest national economy is being destabilised. This will also considerably weaken Austria economically, which none of us would wish.

Germany is the opportunity for Europe and not its threat. However, care must be taken that a kind of new national chauvinism is not encouraged through the constant Germany bashing which then, as a self fulfilling prophecy, brings about exactly what everyone currently thinks they are seeing: Germany behaving in an authoritarian manner within the Union. That would be damaging for this wonderful political vision called the EU.

There he was somewhere in Southern Europe in spring 2014. In a region which tourists from Central Europe particularly enjoy visiting at that time of year for its mild climate, spring-like temperatures and bright sunshine. Only he wasn’t there by choice. He was on the run – from malice, humiliation and defamation: Sebastian Edathy. In 21st century Europe.
END_OF_DOCUMENT_TOKEN_TO_BE_REPLACED